I've recently had to accept the fact I am a perfectionist in certain things and as such, hold others to the same high standards I hold for myself. This isn't always the best for relationships, but now that I'm more aware of it I can work on it. 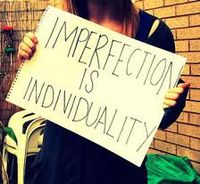 I also realized my German heritage has a tendency to make me see things very much in black and white when sometimes they're grey. My Irish heritage balances that out because I always find the humor too though.

And maybe even laugh because you know I'm right.:)

That's why I really enjoyed listening to Noah Kagan, founder of www.appsumo.com, speak last night at Technori over at Cross Campus because he encouraged us all to stop trying to be perfect. Just do it!

My friend, Nanxi Liu of www.enplug.com, had recommended I attend and since I respect her judgment, went even though I wasn't sure about it having never heard of Technori before. Seems like a really great group and site!

Now, I had no idea when I saw Noah listed as a speaker, that above and beyond his cool site, AppSumo.com, he was also Facebook's third employee, Mint.com's fourth employee and has also had a lot of failures in his life. 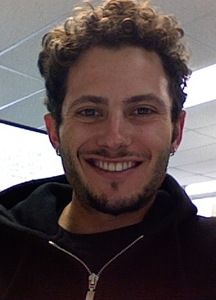 Or that he was single either. LOL

I thought it was cute when the announcer mentioned that in his introduction because he said Noah wanted people to know.

Ladies, he's single and ready to mingle!:) Maybe he should take a spin on Millionaire Matchmaker like some of my friends have done!:)

It's really hard to date sometimes when you're married to your work, or all over the internet.

I've been a workaholic and visible online my entire professional life. I know.

In any case, when Noah took the stage he was a lot of fun to listen to. I mention the failures because I really like seeing entreprenuers being honest about their hard-won success. It's not all hunky dory, happening automatically, or piece of cake proposition.

I was expecting more swear words and crassness, but apparently Noah contained himself for the mixed company. As I glanced around the room I was very pleased to see a nice mix of men and women attending. Perhaps positive balanced change is coming to the LA Silicon Beach scene after all?:) 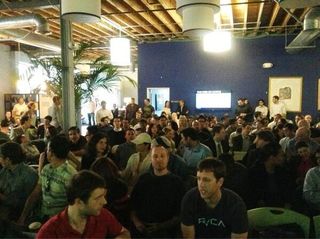 What I really enjoyed hearing Noah say is your business is not all about a fancy website, business cards, etc.

Check out: www.appsumo.com/tacos for more information. Oh, and by the way, I chose tacos in case you're wondering.:)

So, Noah had a select amount of time to address the packed house and chose to throw up on the screen a couple of popular, successful, well-known businesses and then asked us all how would we have validated the need and made them work.

I left my good camera in the car so bear with me on these pix, but I wanted to give you a taste... 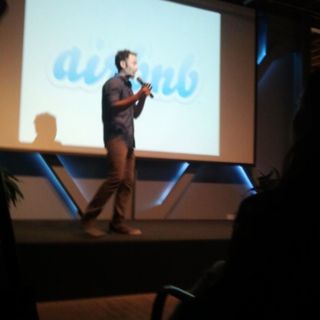 I didn't realize airbnb was a billion dollar company now!  I met the co-founders when I used their services to attend Obama's first inauguration in 2008 and they were so down-to-earth and nice at a welcome party they threw for all of us.

Hope they've stayed that way after all their success.

In any case, Noah had us brainstorm how we would have validated this and made it successful. People participated and it was interesting to hear what they recommended and Noah's feedback. Sorry, didn't take notes and next time you'll just have to attend.:)

Then, what I thought was the best part of the night, after doing this brainstorm analysis with a couple of popular, well-known businesses, he asked engineers to raise their hands and chose two to disect their business proposition with them right there on the spot, live.

Now, if you've been around computer heads for any length of time, you know they are very cerebral, live in their heads (hence my nickname), and often aren't living in reality with whatever they're working on because it's so abstract, doesn't reflect what society needs, and is more for their intellectual pleasure than real life.

It became very clear, very quickly that this was the case with these two earnest young men. I loved how blunt Noah was because I can be just as blunt sometimes and it helps cut through the crap. Doesn't always win you friends, but does clarify things immediately.:)

After disecting their concept, Noah invited them to the front to collect email addresses from potential interested folks who had all come to the conclusion they would probably pay money to have help finding parking in Santa Monica, but had no clue whatsoever to what problem these guys would be solving. 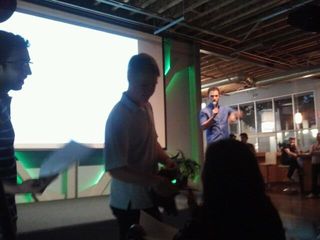 Again, excuse the poor quality, but here's the guys in action with Noah in the background. He has a very charming, disarming way of attacking people I thought was funny and relatable.

Noah gave a lot of words of wisdom and I tried to tweet a bunch at www.twitter.com/thejoywriterx2 if you care to follow along there.

I also believe if you look up the hashtag #Technorila you'll find more comments from the rest of the crowd. Well worth the effort.

Oh, and if you're looking to claim www.tendollarparking.com? Looks like Robert Fauver has already saved it according to his Twitter feed @robfauver LOL

Once Noah was done, which seemed much too quickly, then the host announced each startup presenter. Having seen other presentations at Cross Campus, I was dreading it to be honest, but these were fantastic!

I always enjoy seeing mature businesses that have been around for longer than six months because then I can actually learn something vs. wonder why I was there. I've been running businesses since college and have a lot of seasoned CEO's I consider good friends, even though I may not see or talk to them all the time. I've also taken a lot of business programs and understand various aspects quite well.

I'm going to run through the startups who presented fairly quickly since I don't have a lot of time, but wanted you to be aware of them.

First up was Cap That http://www.mgkcapthat.com/ 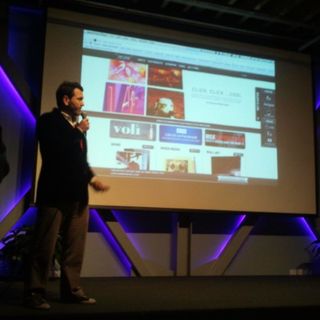 As a photographer, I really liked what they had to offer. It allows you to "cap"ture pix and images from videos and apply to products.

The presenter showed us live how to do it in addition to sharing about the company. I was extremely impressed with the image he presented as a piece of art which you can see below. 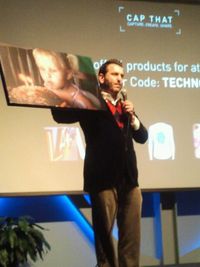 Next up was CodeWarsDojo which is a cool place for accomplished developers to go and practice higher level coding. If you click the link I've attached a Pando Daily article on them which will  tell you more.

I am not a coder, but know many who are and this business model was very impressive. The founders got their start at a hackathon, presented it and were funded that night becoming successful almost immediately. 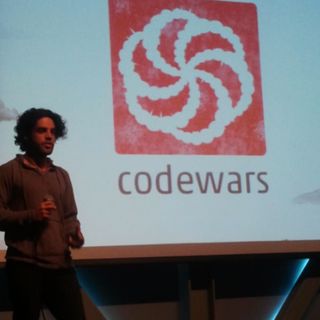 Write nathan@codewars.com to receive an invite to their beta site. Just know they're selective and only accept the best of the best according to the Pando Daily article.

I think you'll be happy you did get in if you're a developer based on the positive response of some of my F/B friends to my post on this.

Next up was a cute idea called Bloom Nation. The guy's names are hard to spell, but I'm sure you'll find them if you look on their site. 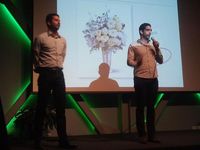 They spent a lot of time explaining why they started the business with personal stories, but not as much time on the success of the business which I would have liked to hear more about.

They have 2,000 florists currently involved and when I Googled them just now, found they've been interviewed on TV as well. 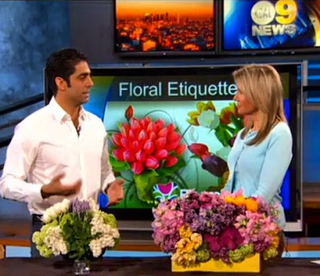 I think there's room for competition in this realm and think they will do well. CBS News described them as the "etsy for flowers." Gotta love men who are passionate about giving flowers to people, right ladies?:)

Now the next presenter I wasn't too excited about because I don't have kids at home and now that my neices are teenagers, we're not seeing as much hand drawn art as playing around with pix and video on F/B.

However, that said, he got my attention when he mentioned the 150,000 users and millions of pieces of art currently "artkived" on his app: http://www.artkiveapp.com/ I think men sometimes discount the power of mom money and the huge marketplace that exists within this realm.

I would highly recommend checking this out if you're a parent, an investor, press or whatever because I see this going far. Very cool concept and obviously doing well. Why didn't I think of this?:)

My absolute favorite was the last presenter. His name sounded familiar and he looked familiar, but I couldn't place him until I met him personally afterward. Hank Fortner was the cool guy who hosted the Skirball Center fashion show which featured dancers on the runway and numerous charities showcased throughout. Very cool fashion show concept and I wish more would emulate their style.

Hank Fortner's wonderful pursuit this time is something near and dear to my heart because I'm a birthmother. For those uneducated on the term, it simply means I placed my son in an open adoption at birth. That's why www.adopttogether.org touched my heart and as evidenced by the many people asking if he had considered presenting this as a TED talk, many others as well. 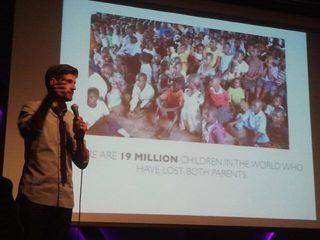 Did you know 19 million children are without families throughout the world? Did you also know only about 9,500 children were adopted last year?

Know why? Because it costs $30,000 to $40,000 a year to do so and that has created a huge barrier for many families who would love to adopt, but simply can't afford to.

This is where www.adopttogether.org comes in. Here's a video from their website which explains it better than I can:

Crowdfunding for adoption! Isn't that the coolest thing you've ever heard? Can you imagine a world where there's no more orphans? Imagine how much this would ease so many of the issues of homelessness, poverty, out-of-wedlock pregnancies, crime and more this would help prevent for children who age out of foster care and never have a family unit to support them throughout their life.

Hank said in the 45 days Adopttogether been live, they've raised over $800k and are estimated to raise ONE MILLION DOLLARS by June 2013. That's amazing to me, but I also feel like this is filling a need that has been there since I was a birthmother over 13 years ago.

I know my church, King's Harbor Church in Torrance, will be happy to hear about this because one of their missions this year is to aid in more adoptions.  Could you imagine if everyone got on board and began sharing this wonderful cause in support? Or even donating to help people adopt?

Here's Hank's story on how it came to be. Can you imagine having helped foster 36 kids and adopting 7 children? What an amazing life story and family. Brings tears to my eyes just writing this and listening. I hope you take the time to watch both videos. Amazing.

I love how multicultural they are too. Very cool. What great parental role-models.

So, as you can see, a phenomenal night filled with really cool companies and speakers. I hope you'll consider joining me at the next one to be inspired, encouraged, challenged and motivated too.