I had the opportunity to re-connect with one of the startups from the Cross Campus fashion startup show recently and asked him what his perspective was on how everything went down for him.

His answer was very revealing and gave me a different perspective which I wanted to share with you now before I write about the wonderful fundraiser I recently attended for Farm Sanctuary at the Peterson Auto Musuem.

I've been so slammed it's been hard to find the time, or the brain space to put down on "paper" what I wanted to convey until tonight. Read on if you care and if you don't, wait for the next blog post because it will be all about 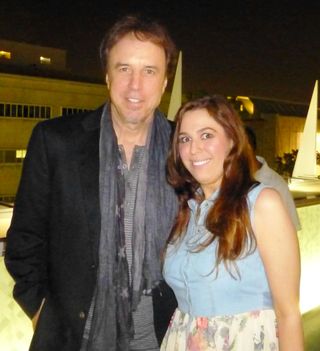 Kevin Nealon hosting (seen here with the lovely and gracious Meredith Turner who is the publicist for Farm Sanctuary), Colbie Caillat singing and everyone else I had the pleasure of meeting during the fun Farm Sanctuary event.

In any case, this young gentleman from Cross Campus' fashion startup shared they had made back the cost of their booth and he felt if the event had been more organized and professional they might not have participated.

He appreciated how it was "thrown together," (his words, not mine) because it had a startup feel to it. That made total sense and I'm sure others who have never attended a fashion show probably thought it was amazing too.

I also realized, after thinking about it, my view was tempered first by the fact when I had asked Cross Campus if I could host my mixer at their location with a certain company only to be turned down and then to learn later that the very company I had highlighted at my mixer was then invited separately to present at their site at a later time (not publicized publicly by the way, but I learned of it because I was there attending another event), it ticked me off.

Then, throw on top of that slap in the face, I also had fallen rather hard and twisted my foot really severely causing me to be in a lot of pain the entire night the fashion show was going on, it also tempered my opinion.

So, all this to say, yes, there were glitches. Yes, everything I mentioned in the last blog post is true and I hope the guys running it take into account for next year, but perhaps I wouldn't have been as harsh a critic if I had been treated with more respect by Cross Campus and hadn't been in pain the entire time.

Not to excuse my behavior, or theirs, merely to explain it.