This past Monday I was invited to attend "THE" fashion event of the season, Jeffrey Fashion Cares, which, according to their research "appears financially, to be among the largest 3rd party events in all of Atlanta’s philanthropic endeavors."

And I was there darlings and I am going to share my experience with you now.:)

Jeffrey Fashion Cares is the brain child of Jeffrey Kalinsky, who along with his amazing Event Co-Chairs, Lila Hertz, Jeffrey McQuithy and Louise Sams (seen here below) 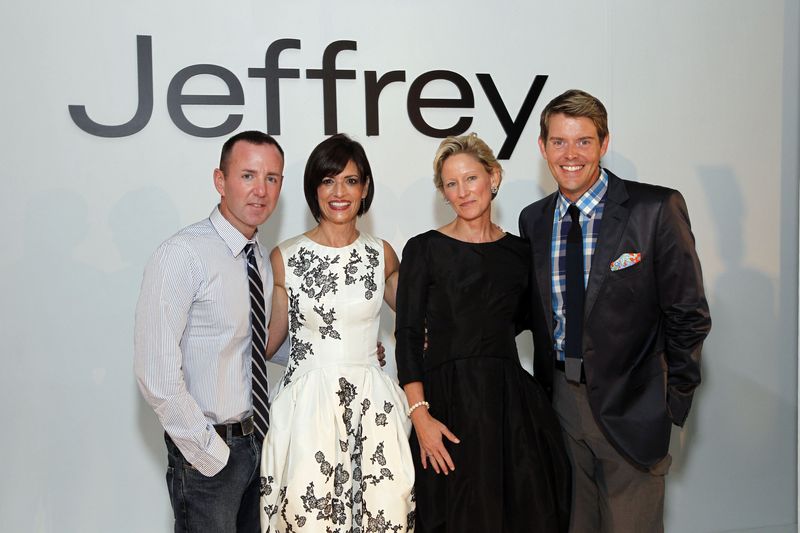 and their amazing planning committee and host committee, created a wonderfully stylish, hip, fun and fabulous fashion fundraiser unlike any I've ever attended in Los Angeles.

But when you consider the fact how connected and accomplished all of the people involved are, it's no wonder! Google their names to see what I mean...

Our evening started off on the 32nd floor of the 12th & Midtown complex which set the stage for the sophisticated evening since the views from the floor to ceiling windows were stunning. 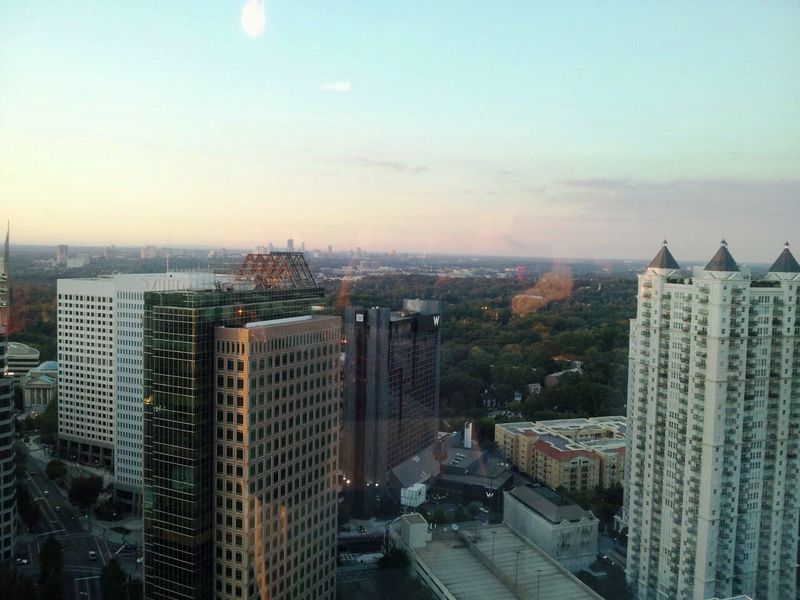 When we entered the room from the elevators guests were greeted by a steam curtain with various logos flashing across as we walked through it to the red carpet and on to the raw space. The fashion show area was hidden by white curtains surrounding the entire runway and seating leaving me very curious, but I was soon distracted by the wonderful people watching.

The Who's Who of Atlanta were there in force and since I'm so new to the city I have no idea who anyone was, but knew instantly this was a very high-end crowd by virtue of the gowns, jewels, shoes, and handbags. The guys looked great too.:)

Although I came alone, I never felt uncomfortable because everyone was gracious and having a wonderful time posing for pictures, admiring and bidding on the silent auction items while enjoying the delicious cocktails and appetizers presented by Honorary Chair, Dennis Dean, owner of Dennis Dean Catering, which "boasts a client list of Atlanta’s top corporate, retail, social and non-profit entities."

I had fun meeting the manager of Jeffrey's Atlanta retail store, Stylist Robert Ballew who I schmoozed around with, and Donald Gesell of Neiman Marcus, assistant to one of the Chairs of the event and others too.

I did see NeNe of the Real Housewives of Atlanta, but missed saying hello.:) 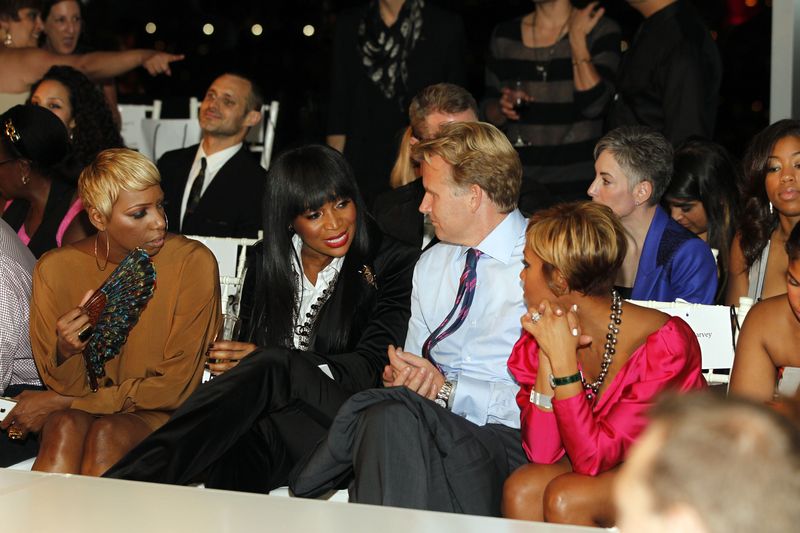 After a refreshing cocktail hour we were invited to join the actual fashion show which began with an auctioneer gathering bids for some of the more expensive offerings like gorgeous Irene Neuwirth rose gold earrings set with Mexican Fire Opal Pear Shape Drop encased with Diamond Pave (2.2cts) valued at $19,300 which raised $6,000; a Todd Selby Louboutin Photograph valued at $3,000 which raised $3,500; and a very popular Nordstrom Tea and Shopping for six which numerous female 11 year olds were bidding on with their mother's encouragement.

I don't know about you, but I wasn't attending fabulous fundraisers at eleven years old, let alone bidding hundreds of dollars for an outing with my girlfriends from the front row of an amazing fashion event. No wonder so many Atlanta women grow up to be such beautiful, stylish fashionistas. I know many people who have never visited the South base all their impressions of Atlanta, GA on the Real Housewives show, but honey, I'm hear to tell you I've never seen such fashionable women on a daily basis. Southern women can dress! 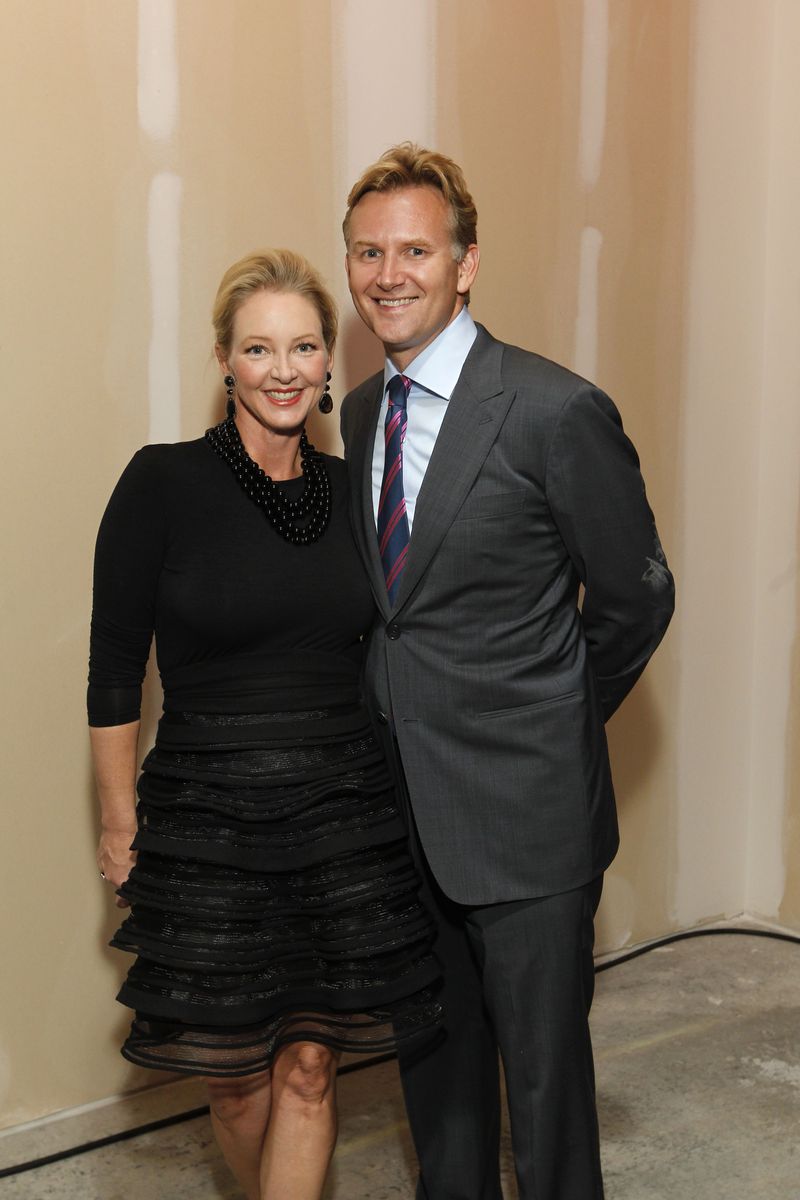 Check out Jezebel Magazine's issue of their Most Eligible Singles 2011 to see what I'm talking about. The men aren't too shabby either.:)

And the fundraiser itself was all for such worthy causes too. "The Susan G. Komen for the Cure Greater Atlanta Affiliate was established as a resource for those fighting and seeking to prevent breast cancer and through its fundraising events, has been able to support breast cancer research, local grassroots organizations, community agencies and family support groups."

Atlanta AIDS Partnership (AAP) was the second beneficiary and what's amazing about Jeffrey's fundraiser endeavor is .93 cents of every dollar goes to the charities. Very impressive.

And what I also loved about the fashion show portion of the evening was the fact not only was Jason Wu featured as the 2011 Special Guest Designer for the 19th Annual Charity Event and Fashion Show for the 2nd time (Michelle Obama's designer of choice for the Inauguration), 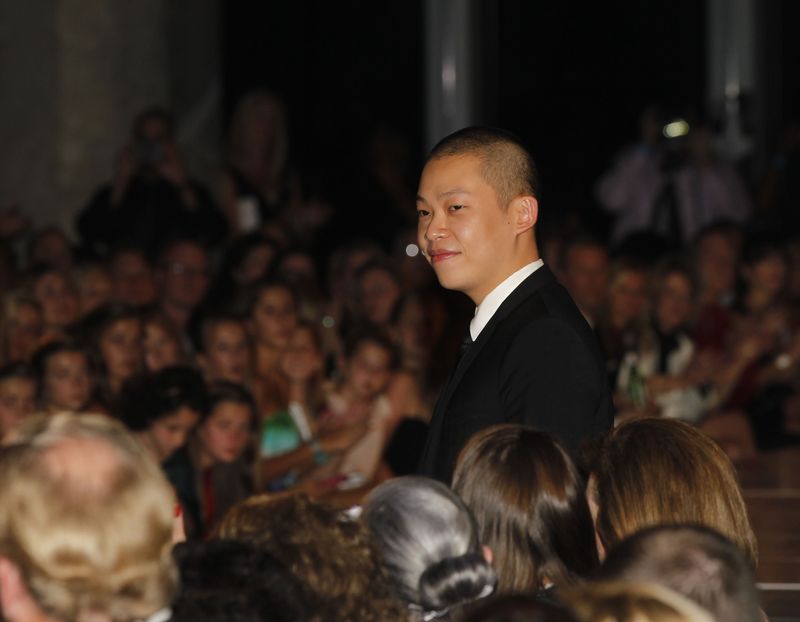 but also some of my favorite designers I've admired over the years when I first studied Fashion Merchandising in college presented too.

Imagine sitting in the audience as Marc Jacobs, YSL, and other famous designer's designs were in front of you on the longest runway possible on over 20 beautiful models for over 20 minutes. Why imagine it when I can show you pictures though! So sit back, enjoy, and let me know which designs are your favorite. I know it's hard to decide there were so many gorgeous pieces, but try.:) 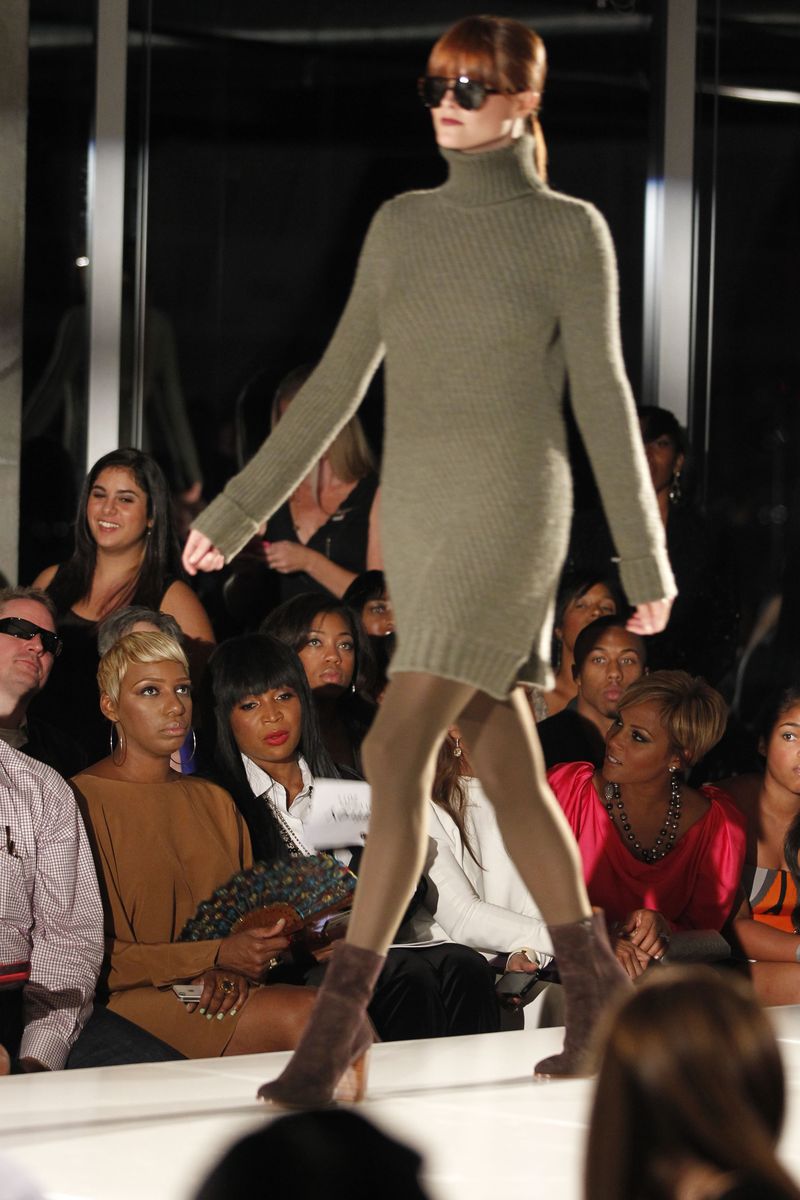 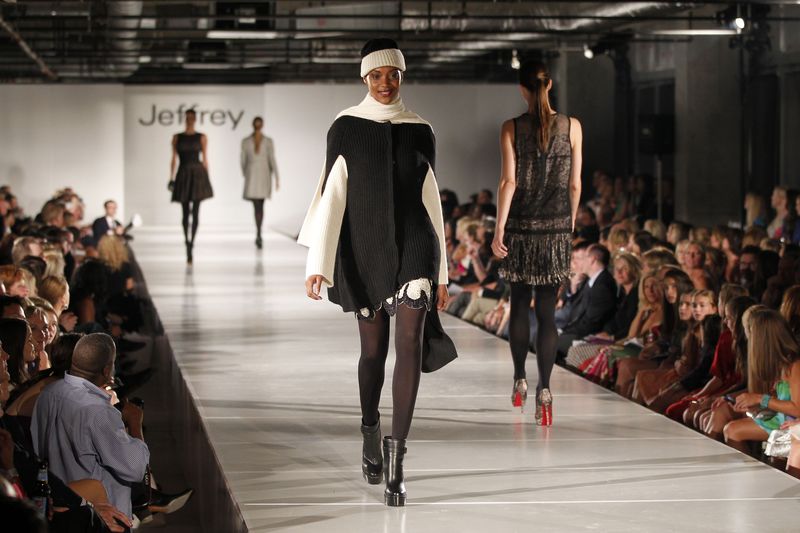 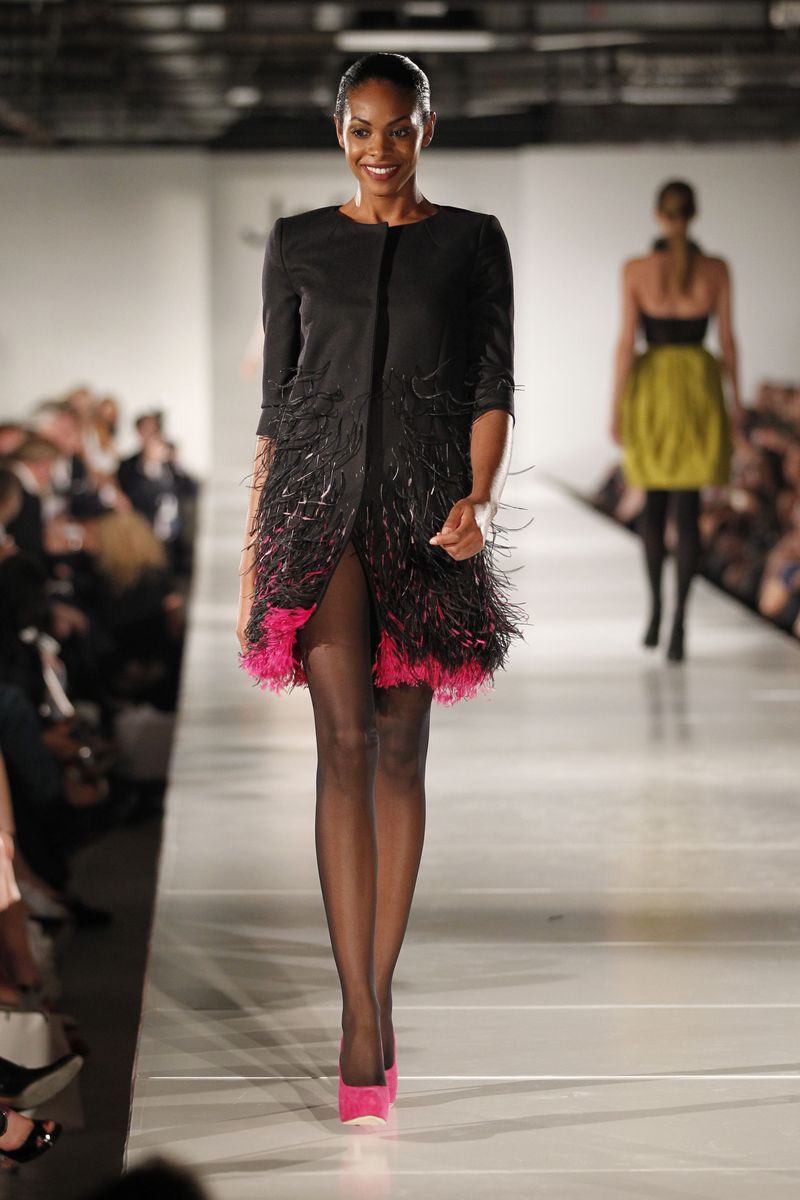 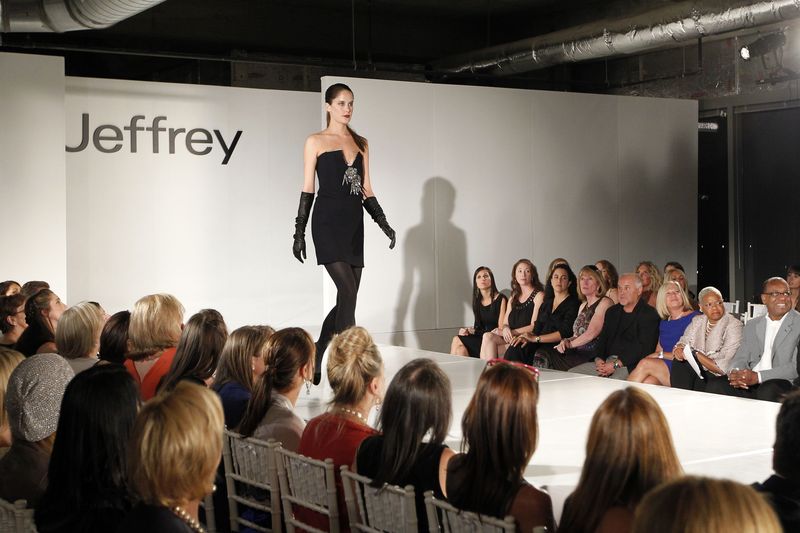 There are many more pictures to share, but it's late and I have to get up early for a day-long seminar.

More to follow because this is only a portion of the designs...