Barack Obama says Islam has always been a part of America's story... Not!

Received this letter  from a friend and thought I'd post it for consideration while I continue blogging on something else. Wake up America!

Please take a moment to watch this informative news show exposing the deadly Muslim Brotherhood in America right now you won't hear about on mainstream media. This is homegrown terrorism and it's allowed by our government! It's just shocking to me.

Now on to the actual letter I received...

Barack OBAMA, during his Cairo speech,  said:   "I know, too, that Islam has always been a part of  America 's story."

Were those Muslims that were in America when the Pilgrims first landed?  Funny, I thought they were Native American Indians.

Were those Muslims that celebrated the first Thanksgiving day?  Sorry again, those were Pilgrims and Native American Indians.

Can you show me one Muslim signature on the United States Constitution?  Declaration of Independence ?  Bill of Rights?

Did Muslims fight for this country's freedom from England ?  No.

Did Muslims fight during the Civil War to free the slaves in America ?  No, they did not.

In fact, Muslims to this day are still the largest traffickers in human slavery.  Your own half brother, a devout Muslim, still advocates slavery himself, even though Muslims of Arabic descent refer to black Muslims as "pug nosed slaves."  Says a lot of what the Muslim world really thinks of your family's "rich Islamic heritage," doesn't it Mr. Obama?

Where were Muslims during the Civil Rights era of this country?  Not present.  There are no pictures or media accounts of Muslims walking side by side with Martin Luther King, Jr. or helping to advance the cause of Civil Rights.

Where were Muslims during this country's Woman's Suffrage era?  Again, not present.

In fact, devout Muslims demand that women are subservient to men in the Islamic culture.  So much so, that often they are beaten for not wearing the 'hajib' or for talking to a man who is not a direct family member or their husband.  Yep, the Muslims are all for women's rights, aren't they?

Where were Muslims during World War II?  They were aligned with Adolf Hitler.  The Muslim grand mufti himself met with Adolf Hitler, reviewed the troops and accepted support from the Nazi's in killing Jews.

Finally, Mr. Obama, where were Muslims on Sept. 11th, 2001?  If they weren't flying planes into the World Trade Center, the Pentagon or a field in Pennsylvania killing nearly 3,000 people on our own soil, they were rejoicing in the Middle East.  No one can dispute the pictures shown from all parts of the Muslim world celebrating on CNN, Fox News, MSNBC and other cable news networks that day. 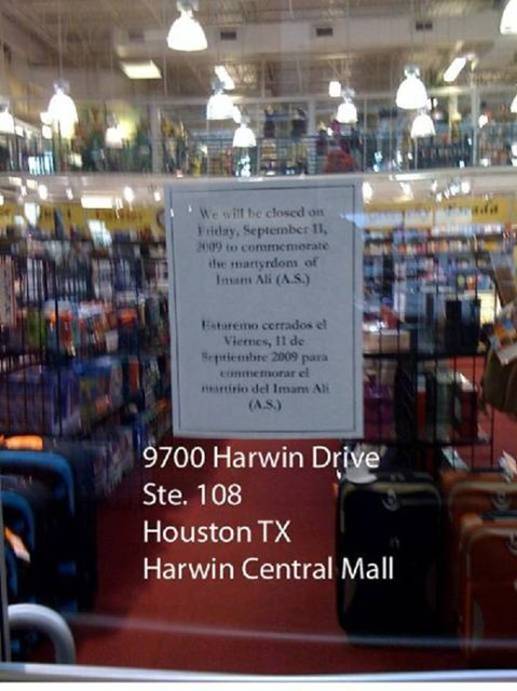 ("We will be closed on Friday, September 11, 2009 to commemorate the martyrdom of Imam Ali")

Strangely, the very "moderate" Muslims who's asses you bent over backwards to kiss in Cairo , Egypt on June 4th were stone cold silent post 9-11.  To many Americans, their silence has meant approval for the acts of that day.

And THAT, Mr. Obama, is the "rich heritage" Muslims have here in America ..

Oh, I'm sorry, I forgot to mention the Barbary Pirates.  They were Muslim.

And now we can add November 5, 2009 - the slaughter of American soldiers at Fort Hood by a Muslim major who is a doctor and a psychiatrist who was supposed to be counseling soldiers returning from battle in Iraq and Afghanistan...

That, Mr. Obama is the "Muslim heritage" in America.

When will people wake up to this homegrown terrorist threat within our own country? This is why I'm against the NYC Mosque as stated perfectly by Christine Brin:

"The issues at stake in the Ground Zero Mosque and the Shariah Index Project are not about Americans supporting the Constitution’s protection of religious freedom.

The issues at stake here are about Americans protecting the Constitution from Shariah-adherent groups using the protective guise of religious freedom to attack the Constitution itself – using a triumphal Ground Zero mosque as “the base” for a project to institutionalize Shariah in America."

You can read more background information on the actual plans at: