If you've been reading my blog, or following my philanthropic activities for any length of time, you will know I have supported Surfrider Foundation in numerous ways over the years.

I've held fund-raisers on their behalf, like this one: SBPC's Surfrider Benefit/Tasting Party at The Shore hosted by She's Got the Look Finalist, Melissa Todd

(W)anted to share the wonderful 25th Anniversary Surfrider Foundation fundraiser myself, and two of my friends, Angelique Chacon and Erica Forrette, volunteered for this past Friday evening.

We had the best time! Here's a little photo essay of our time there: 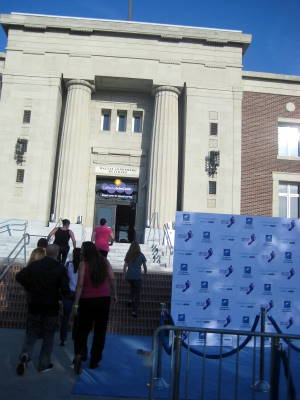 This is what it looked like when we arrived. There was a "blue" carpet in honor of the occasion. 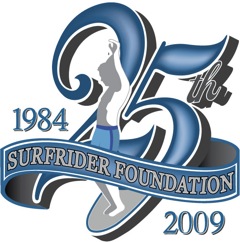 You can click Surfrider 25th Anniversary Gala raised $150k! Incubus, Pearl Jam & Actor David Chokachi honored to read my event coverage of the entire event because it really was amazing.

I've also attended local chapter meetings to learn more about what they're doing to protect the ocean because I love the ocean so much too having grown up on the Strand and in the South Bay. I never joined though because it didn't really jive with how I view ecology and helping people.

However, I am still shocked that their main way of responding to the LARGEST ECO DISASTER IN OUR HISTORY!!!! is to participate in a nation-wide event called Hands Across the Sand to protest off-shore drilling.

Forget the fact that right now most of our oil comes from the Gulf of Mexico, fisherman's lives are devastated by the BP Oil Spill, and volunteers are needed to help clean up the beaches, no, this eco group has decided a passive protest of simply holding hands is the best way to help this situation.

When Eco/Green initiatives supersede saving human lives and our wildlife and the ocean they claim to care about and want to protect, that's when I call this activity stupid, misguided, waste of time, total waste of volunteerism, and a blight on the eco landscape.

I know it's hugely popular and many people are expected, but I just had to express my devil's advocate opinion because there's so much that all the hand-holding volunteers could actually do to help our ocean rather than stand in a line protesting. Why not protest BP's refusal to accept more help now? Why not write letters or protest Obama's handling of this disaster and demand safety inspections that are actually followed? Why not storm Congress and demand they do something to help our LA wildlife and oceans more? Why not ask that the moratorium be lifted since over 40,000 people's lives are also being devastated? Why not boycott BP gas stations?

Here's a link to a website called Volunteer Louisiana to register as a volunteer when they're ready to have more, or when the volunteers get tired of holding hands and actually want to do something tangible to help right now.

What if every single volunteer donated $10 to support American citizens struggling in the after-math of this horrific oil spill? Here's some guidelines to consider if you decide to go this route:

"Confirm the Need before Collecting

Donors should be wary of anyone who claims that "everything is needed." Many groups have been disappointed that their efforts and the goods they collected were not appreciated. A community hit by a disaster, however, does not have the time, manpower or money to dispose of unneeded donations. Get precise information and confirm the need before collecting any donated goods."

And here's a way to research how you can donate to a reputable organization:

"The National Donations Management Network is a FEMA supported system that is managed by The Aid Matrix Foundation, Inc. is a 501(c)3 nonprofit headquartered in Dallas, Texas, USA, with offices in Germany and India. More than 35,000 leading business, nonprofit and government partners leverage our solutions to mobilize more than $1.5 billion in aid annually, worldwide. The donated goods, money and services impact the lives of more than 65 million people. Donations needed in Louisiana by VOAD are listed on Aid Matrix and partners can respond to those needs. (www.aidmatrix.org)"

And here's information on the organization that was established to help with this:

The Louisiana Business Emergency Operations Center (LA BEOC) was activated on April 28, 2010 response to the Deepwater Horizon Oil Spill to facilitate offers of assistance to the United States Coast Guard and BP, in the event that their efforts to contain the spill 48 miles off the coast of Louisiana were unsuccessful. The exploration well is located in the Mississippi Canyon Block 252, operated by British Petroleum (BP) and owned by Transocean Ltd.

On April 20, 2010, an explosion occurred on the rig, resulting in the tragic deaths of 11 workers and many more injured who were subsequently rescued at sea. On April 22, 2010, the rig sank into the Gulf of Mexico, leaving a damaged riser spilling an estimated 5,000 barrels of crude oil into the Gulf every day.

This incident has been declared a “spill of national significance” by the Secretary of the Department of Homeland Security (AND ONE OF THE LARGEST ECO DISASTERS OF OUR TIME BY ALL OTHERS!) and a full-scale emergency response plan has been launched by the responsible party – BP – and the U.S. Coast Guard in an effort to contain the oil spill, cap the undersea well, and mitigate the consequences to the gulf coast. Louisiana and other Gulf States stand ready to assist the BP-Coast Guard response efforts when called upon to do so.

For the most current information on the Deepwater Horizon Oil Spill, please visit http://emergency.la.gov/  or deepwaterhorizonresponse.com.

For the most recent updates on the oil slick projections, please visit here

I'm sure this hand holding event will be wonderful and just another example of the power of the eco peeps, but c'mon! There's so much more you could be doing than simply standing holding hands ACROSS the sand. You could be raising money, helping LA fishermen and their families in some capacity, pressuring BP & President Obama to do more, protecting our wildlife and oceans.